A Cupix 3D tour consists of sections, which are collections of photos and videos from the same area of the capture site that are grouped together. Creating a new 3D tour begins the process of organizing 360 photos or videos into sections. 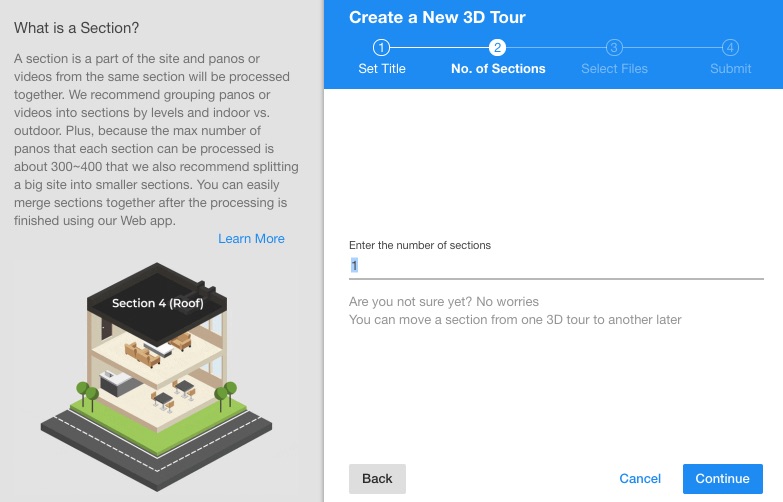 After uploading 3D tour data, the server aligns photos and creates the 3D mesh section by section.  For the most accurate placement of photos, organize sections while keeping the processing performance in mind.

The Size of the Site

400 photos is the maximum number of photos per section the Cupix server can process. The server determines the relative locations of photos by comparing every photo to each other, and this process takes much longer with large photosets. This is because the number of required comparisons needed multiples with each additional photo.  We recommend uploading less than 300 photos to each section if you need the tour to finish processing within a few hours.

The best practice when capturing a large site is to organize photos into sections of less than 300 photos.  This covers approximately 10,000 square feet (or 1,000 square meters) of space, although this will vary based on complexity of the capture site.

The Cupix software assumes that all photos in a section are taken on the same ground surface or on any stairs directly connected to the floor. Because all 360 photos in the section are directly compared to one another to determine their relative locations, photos taken on any elevation in the space must be visible to panos taken on the ground. This means that photos taken from two different floors in the building may not be processed correctly, so the user should create separate sections for each level.

Photos taken indoors and outdoors need different environmental considerations when processed.  When photos are uploaded, our software first detects whether photos in each section are taken indoors or outdoors, and after making this determination, processes them with slightly different algorithms.  If there are photos that are taken both inside and outside in the same section, the resulting positions of the photos may be less accurate.

Sometimes the Cupix software is unable to localize uploaded photos in a main section.  As explained in "How to take 360º photos and 360 videos", there are a number of reasons our software is unable to determine the positions of some photos or part of a video clip.  These non-localized photos are separated  and added to sections with titles that have the suffixes NA or ANC.

Sections can be grouped together and presented as a single site in a 3D tour.  For example, photos from multiple floors of a hotel can be uploaded as several sections with each section holding images from a single floor.  Once the upload is complete, each floor section can be grouped into a single 3D tour. You can also group NA or ANC sections to manually fix their positions, their scale, and orientation, and then present them together as a whole 3D tour.  The Tour Editor provides powerful online editing tools for these purposes.

The left toolbar in the Overview tab provides basic group operations on sections: 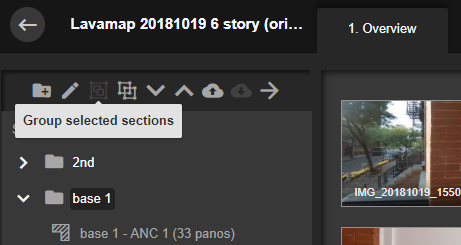 Arrange sections in a group

You can arrange each section in a group to align their locations relative to each other; to scale them simultaneously or separately; and to rotate them to the correct angles. You can edit the photo connectivity between two sections to make a virtual walk-through with a natural transition that links the sections of the 3D tour. Uploading a floor plan to use as a reference image is the best practice when arranging sections in a group.  Refer to Add a floor plan drawing in the Web Player

for additional information. If a floor plan image is not available, use the auto-generated blue sketch under the section layout as a visual aid. The Cupix software marks black lines on the sketch to represent walls or vertical planes.

Note: For single-pano sections (NA section), you can complete the arrangement by entering the approximate camera height in the Arrange Section dialog box. 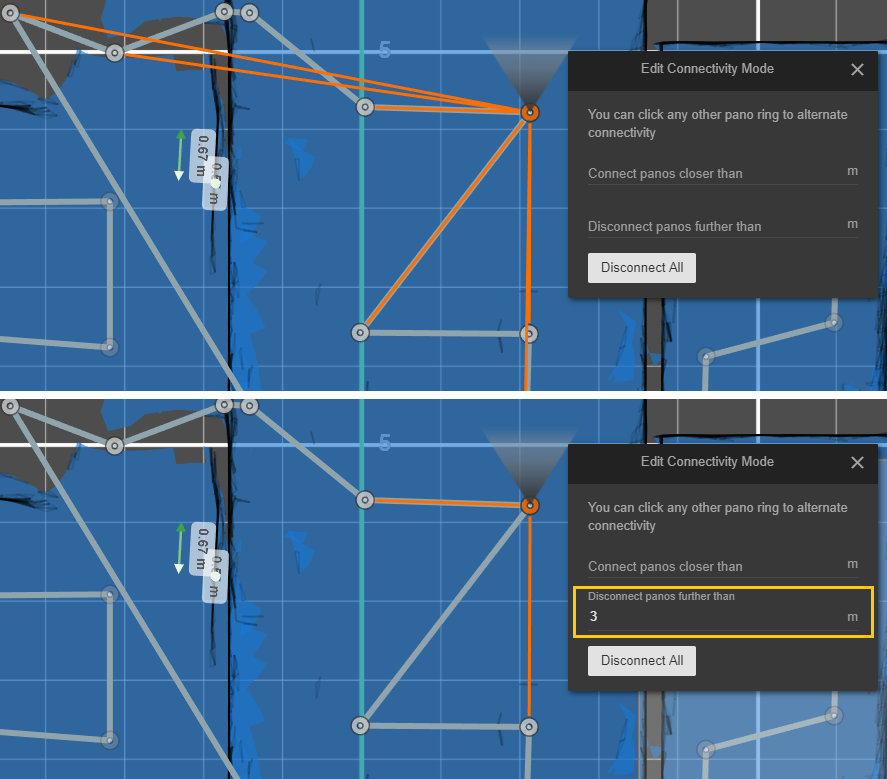 There are additional connection features availaable in Edit Connectivity Mode. You can automatically connect photos that are within a certain distance of your selected photo by using ‘Connect panos closer than’. Connections to this pano will automatically be made to other panos within the specified distance. The same mechanism applies disconnecting panos with the feature ‘Disconnect panos further than’. 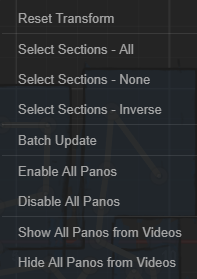 In addition to the previously described methods for editing pano connections, right clicking anywhere on the grid will show the ‘Batch Update’ option. 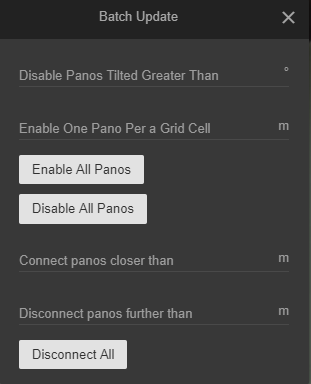 The Batch Update window allows you to edit connections as a whole in a number of ways: