Cupix creates 3D virtual tours from 360 camera photos or videos. When a set of 360 degree photos is uploaded to the Cupix online app, the software uses the images to determine the location and orientation of the camera in each picture. For 360 degree videos, the motion path of the video recorder is used instead. A 3D model of the site is automatically generated by analyzing the uploaded images. This is possible due to a combination of two cutting-edge technologies - photogrammetry and 3D reconstruction.

The principle of photogrammetry involves detecting common features between photos. A feature is a cluster of pixels from a small, unique portion of the image (ie: corners, furniture, paintings), and there are typically tens of thousands of these pixels between two photos. The camera location and tracking information is determined by repeatedly solving the problem of “What is the position of the camera in each picture to make common features between these two images appear as photographed?” This makes the core photogrammetry algorithm a highly complicated optimization problem. During image processing, millions of unordered and noisy 3D points are generated as well.

The second part of the technology, 3D reconstruction, deals with how to create a clean, textured 3D mesh model using this collection of 3D points, also called a point cloud, which is generated during photogrammetry. Therefore, there are a few guidelines to keep in mind as you take 360 photos to upload to our server.

If there are an insufficient number of similar pixels or features among uploaded photos, our software will not be able to determine the camera location or create a 3D model. This results in NA or ANC cases. NA, or Not-Aligned, is when the location of a 360 photo cannot be computed. ANC, or Aligned-but-Not-Connected, is when 360 photos are aligned as a group but are not connected to the entire set.

Listed below are some reasons that can lead to an insufficient number of common features in photos, as well as tips to avoid these situations.

The most frequent reason for a lack of common features and, consequently, the failure of the process is when there is not enough overlap between photos.

No common features within the space

This is the most challenging case, and a typical example is when taking photos of single-colored walls with no decoration.

The line of sight is blocked

Areas where walls are close together frequently block useful features needed for spatial recognition or positioning from the camera’s view. This often occurs at doorways, entrances, built-in room dividers, and narrow spaces like hallways and small rooms. 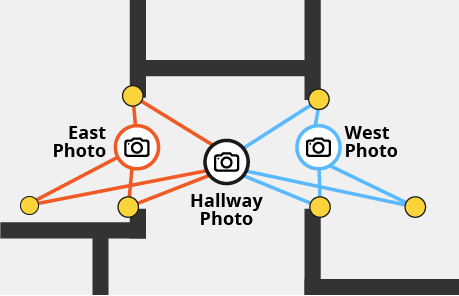 Blurred images can make it difficult for the software to identify common features. Here are some possible causes for blurred images, as well as tips to fix them.

How many photos are required?

If you need to estimate the number of photos to take, use the following guidelines:

In practice, the number of needed photos may vary with the structure of the site, and so a better question to ask first would be where to take photos rather than how many photos to take.

Here are rules to follow when taking photos in a house. 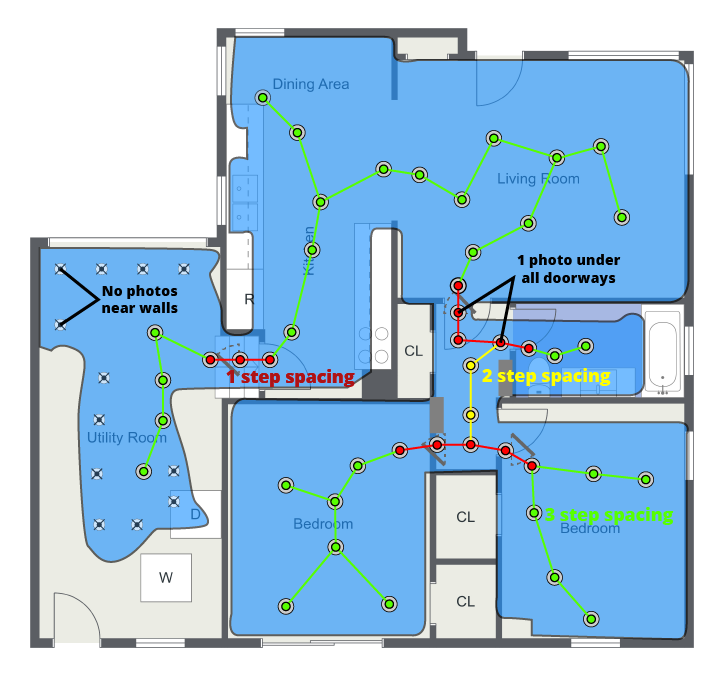 The quality of the 3D model improves with an increasing number of photos. This is because each image provides an additional point cloud, which is used to accurately create the 3D mesh needed to generate the model. However, because each additional image requires exponentially more time to process, you will need to find the right balance between mesh quality and resources you can spend on your application. 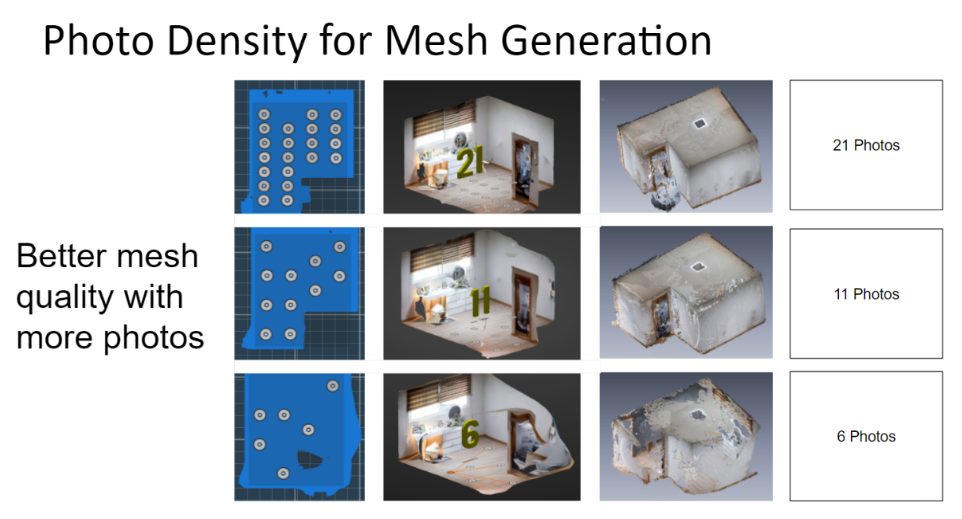 How to hold the camera

Note: Tilting along the vertical axis of the photo is automatically compensated during processing, so the camera does not need to be held exactly upright.

Interval Photos are a series of photos taken sequentially after a certain distance or amount of time. Our software assumes each photo location and proximity are indicated by each photo’s capture time and file name number, which can make processing much faster and more reliable. Therefore, interval photos taken by a handheld or helmet-mounted camera are an excellent choice when you need to capture a large site quickly.

To take full advantage of this option, use one of the following three methods:

Most 360 cameras support GPS tracking, and cameras can record GPS information in the metadata of the photo file. If you turn on the GPS option during shooting, our software is able to use the GPS data in several ways when you upload the 360 photos:

Tips:Make sure the GPS signal is strong enough if you want to use this option. Never use this option for indoor spaces. If you are taking outdoor photos, keep camera intervals longer than the GPS accuracy range (typically 5-30 feet). If there are tall buildings around the site, the GPS data may not be accurate enough to be used for photo alignment.

You can efficiently capture a site by recording a 360 video instead of taking multiple 360 photos. Our software automatically selects photo frames from the video clip that can effectively represent the space. The walking path is regenerated and displayed in the Cupix Web App, allowing you to quickly align the 3D tour with a floor plan or 3D BIM model. However, you should be aware that the photo quality will not be as clear as still photos, and the file size of a video can be very large.

Tips to keep in mind when recording a video