The Cupix software creates 3D tours from 360 photos using a concept called photogrammetry, which is the science of making measurements using photographs.  With Cupix, the dimensions of objects that are 20 meters (65 ft) or smaller can be obtained from photographs with a margin of error of 1% or lower with the correct setup.  For accurate dimensions, each section of the tour needs to be scaled as accurately as possible before virtual measurements are made.

Cupix photos are localized by comparing photos to each other to determine their relative locations. This means the result of photogrammetric processing is based on a relative coordinate system among photos. Therefore, it is not possible to measure a real world distance using the photos until the absolute scale factor is correctly calibrated.

Keep in mind: The Cupix software uses a few assumptions to determine the default scale when processing photos. This is primarily to make the locations of photos in a 3D tour look reasonably accurate. To accurately measure dimensions, the tour will need to be scaled correctly using methods explained in this article. We call this scale the absolute scale.

DISCLAIMER: Although measurements made with Cupix can be very accurate, this feature is intended for planning purposes. Please select a different method of measurement if the intended applications, your organizational guidelines, or regulations require tight tolerances and high accuracy.

Methods to Calculate the Absolute Scale

There are three ways to calculate the absolute scale: Taking photos with pre-scaled marker sheets, using a known dimension, and using the average camera height.

One way to determine the absolute scale is by taking 360 photos with pre-scaled Cupix-recognized marker sheets attached to walls and surfaces in the capture space. This is the most accurate way to calculate the absolute scale of photos. Each marker sheet has two unique QR codes that are spaced with a predetermined distance between them, as long as they are printed at the actual size. The Cupix processing software recognizes these QR codes if they are in any uploaded 360 photos. If the markers are correctly recognized, the scale status will be set to Scaled by auto-detected markers. This automatically calibrates the absolute scale of the 3D tour.

These pre-scaled marker sheets can be saved from the Downloads page, with 11" x 17" and A3 (297 mm x 420 mm) paper options available. Use them according to the following instructions for the most accurate results.

How to use printed marker sheets

The simplest method of calculating the absolute scale is to use the average camera height of photos taken from the floor. This is a reasonably accurate alternative if marker sheets are not available or usable and there are no known dimensions to use as a reference. To use this technique effectively, define the floor position using a photo taken at the height which most photos in the section are taken at. Use this photo to set the camera height value. This means that the floor should not be defined using a photo taken on an incline or stairs, or when the camera was raised or lowered.

To make a measurement from a 360 photo (pano) in the 3D tour, the two endpoints of the dimension will need to be defined. After two endpoints are selected, the distance between them is calculated. There are four methods for defining these endpoints in 3D tour images: Selecting common points from two panos, selecting points on the floor, on 3D boxes, or on the generated 3D mesh. These options are also used when defining other 3D coordinate positions of annotation objects such as pushpins, hotpots, 3D text, and so forth. 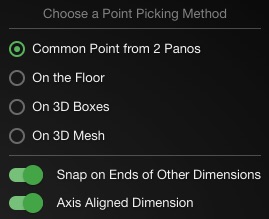 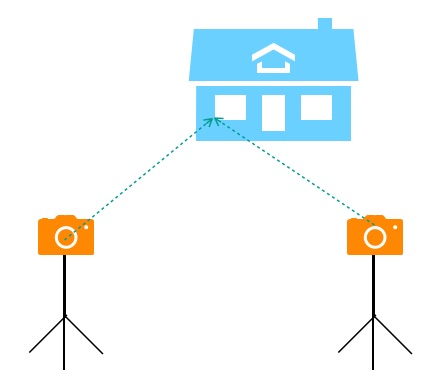 Measurement endpoints can be set by defining 3D points in the tour. A 3D point is defined by identifying the location of a common point between two different panos. Freehand selection of the point location between two panos can be relatively accurate, however it is also an opportunity to introduce human error into the measurement. To minimize the amount of error introduced, after selecting the location of a point in the first pano, a dark gray dynamic hint line will appear in the second pano. This line indicates that the photo comparison software has determined the location of the point in the second photo is somewhere on this line. The mouse pointer is automatically snapped to the dynamic hint line, which helps with accurate alignment and selection of the point in the second photo. Using this method allows you to accurately define 3D points on any surface, even when the underlying 3D mesh is not used or generated from software processing.

Select Points on the Floor

After the floor position is correctly defined during the scaling step, you can accurately make measurements between points located on the floor. By clarifying that the endpoints are located on the floor, and by assuming the floor is flat, the software does not need to take into account the different heights of the points when calculating the measurement. Because the approximate distance from the camera to the flat floor is known, the distance between two points can be calculated from one pano. Therefore, this method does not need to involve defining the location of endpoints from two different panos. This option is useful when measuring dimensions for floor plan generation.

The Layout menu allows you to insert various 3D objects in a tour including 3D boxes. The dimensions of these 3D boxes is an available measurement option. This method is useful if you know the location of the 3D boxes and would like to know how large the box is in the real world.

Select Points on the 3D Mesh

When uploading 360 photos to Cupix for processing, you have the option to generate a 3D mesh from the photos in addition to the 3D tour.  The resulting 3D mesh is a 3D model of the structure of the capture space, which takes longer for the software to create than only generating a virtual tour. However, the 3D mesh offers another method of measurement in photos by picking points on the underlying 3D mesh. Because the 3D mesh models the surface structure of the capture space, this makes using points on the mesh a suitable method for measuring wall-to-wall distances.

The easiest way to check the quality of the 3D mesh is to make sure the auto-generated blue sketch in the Layout tab has clear and correctly placed lines representing the walls. Refer to ‘Do more photos make the 3D mesh cleaner?’ in the article How to Take 360º Photos and 360º Videos for additional information.

There are several other factors in addition to the absolute scale which can affect measurement accuracy:

Measuring Dimensions in the Web Player

Other users with access to the workspace and Web Player viewers can measure dimensions in your 3D tours if they are granted Review-Only permissions.  You can set permissions for selected collaborators and customers by switching on the Enable Measure option in the Customize Player menu.  Refer to Collaborate Securely for additional details. 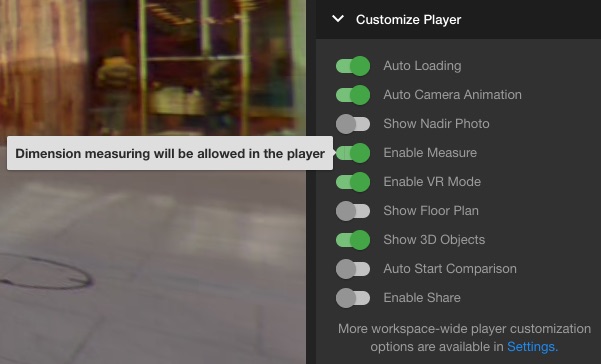